AIR RAIDS DURING THE PORTSMOUTH BLITZ 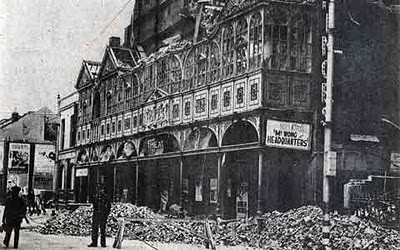 German air raids against Britain during The Blitz followed the German Luftwaffes failure to establish air superiority in the Battle of Britain. It has been estimated that about 40,000 civilians were killed, 46,000 injured, and more than a million homes destroyed and damaged in Britain, during this period.

The City of Portsmouth, home to the Royal Navy, with facilities such as, Portsmouth Dockyard as well as countless other military and industrial installations, was obviously a prime target for bombing raids by the German Luftwaffe. Portsmouth officially suffered 67 air raids between July 1940 and May 1944, three of these categorised as major attacks.

The three major raids took place on August 24th 1940 during the Portsmouth Blitz, January 10th 1941 and March 10th 1941. One of the heaviest attacks took place on January 10th, approximately 300 German aircraft attacked Portsmouth dropping 350 tons of high explosives and 25,000 incendiaries. There were 171 deaths, 430 people were injured and 3,000 were made homeless. Major damage was caused in Commercial Road, Palmerston Road, Kings Road, Old Portsmouth and Portsmouth Guildhall was virtually destroyed by fire when hit by incendiaries, the water mains were damaged making fire fighting impossible, so the fire burned for 12 hours.

During the 4 year period of the Portsmouth Blitz 930 people were killed, 1,216 hospitalised and a further 1,621 suffered less severe injuries. It is estimated that almost 10 per cent of the city's 63,000 homes were destroyed approximately 6,000 were damaged and almost 69,000 houses suffered some form of minor bomb damage.

On the 24th of August 1940 The Princes Theatre in Lake Road, was bombed during an air raid whilst a matinee performance was taking place. Due to communication problems no air raid warning was given, 8 children were killed in the bombing and many more were injured. 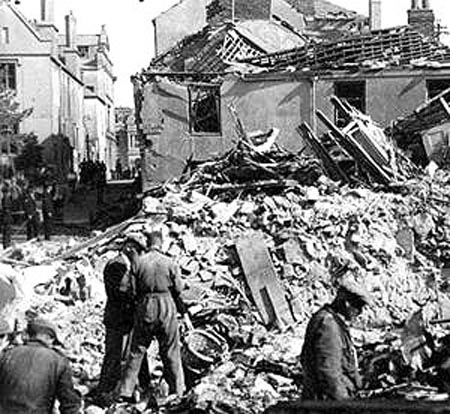 Although locations such as the naval base, military installations and factories were undoubtedly the primary targets, aerial targeting at that time was not particularly accurate, especially during night time raids when visual methods could not be used.

Other target navigation methods such as dead reckoning or radio triangulation were used instead, as a result large numbers of civilian residential areas were hit as mentioned above.

The Germans also believed that heavy civilian casualties would put pressure on the British Government to find a peaceful resolution to the war. German bombers often dropped their bombs early to avoid the heavy defences close to their intended targets, but whatever the reason the result was the same, massive destruction in residential and commercial areas with all parts of the city being effected.

In 1940 in an effort to divert the German bombers away from their intended targets, decoys sites were set up. These were part of Colonel John Turner's decoy programme the sites were officially known as "Special Fire" of "SF" sites, however they became known more generally as "Starfish Sites". These decoy sites burnt fuel and other combustible materials to simulate burning factories or houses.

To the outrage, understandably, of local residents less populated areas such as Hayling Island were deliberately used as "Starfish Sites", decoys for the German bombing runs. Temporary buildings were constructed and the lights were left on during raids, also fires were lit to imitate the effect of incendiary devices. Using these tactics bombers were tempted to drop their bombs onto Hayling Island instead of Portsea Island thereby saving many lives in the more densely populated Portsmouth areas. "Starfish Sites" were set up on the west coast of Hayling Island, at Farlington Marshes and on various small islands in Langstone Harbour such as Long Island and Bakers Island.

The bombs dropped onto the city during the Portsmouth Blitz were a combination of high explosives and more commonly incendiary devices designed to cause fires. According to German records as many as 40,000 incendiary devices were dropped during the major raid on the night of the 10th - 11th January 1941. There were additional casualties in Portsmouth Dockyard and other naval or military establishments. 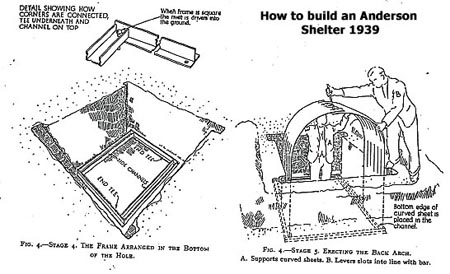 To some extent the city was prepared for the bombing raids, 25,000 Anderson shelters were supplied by the government, but it is difficult to establish exactly how many of these were actually erected, some 14,000 were installed by City Engineers, but many of the shelters were delivered to house holders to erect themselves. In addition to these 123 semi underground trench shelters were built as well as more substantial brick built shelters, tunnels cut into Portsdown Hill were also used as shelters. It is widely believed that the death toll would have been significantly higher, were it not for the preparation taken to provide private these shelters and the work undertaken by the Civil Defence services.

The city was also heavily defended with searchlights, anti-aircraft batteries at Southsea Common, Sinah Common at Hayling Island and Gilkicker, barrage balloons and fighter aircraft. During the worst of the bombing, many householders left their homes during the night and sought shelter in the more rural areas to the north of Portsea Island.

Many of Portsmouth's great buildings were either damaged or destroyed during this period and some would argue, along with other British cities damaged during the Blitz, that the architecture of Portsmouth never fully recovered. Portsmouth Guildhall was severely damaged by fire after it was hit by incendiary devices and many items such as paintings were lost, also severely damaged was the Royal Garrison Church in Old Portsmouth. Other damage included, 30 churches destroyed, 8 schools destroyed, 1 hospital destroyed another badly damaged, 150 pubs and licensed premises destroyed and the principal shopping areas such as Commercial Road and Palmerston Road were virtually obliterated.

The urgent need for post-war redevelopment and the urgency required to rehouse people, led to the mismatch of ancient and modern buildings that can be seen juxtaposed around the city today. Following the war time destruction in the city, many residents were permanently rehoused in new housing schemes located away from Portsea Island such as Leigh Park and Paulsgrove. In addition new residential areas were developed within the city with the building of high rise tower blocks in Buckland, Somers Town, Landport and Portsea.

During the Blitz in Portsmouth, John Welch 7630568 was an 18 year old corporal serving with the Royal Army Ordanance Corps (RAOC) at Hilsea barracks. He kept a personal diary and notebook, you can view his entries during one of the worst air raids in the Portsmouth Blitz starting 5th January 1941. Diary of John Welch 1941 and his blitz notebook.

The documents and picture are courtesy of Penelope Welch, his daughter. Thank you for allowing us to reproduce them here.