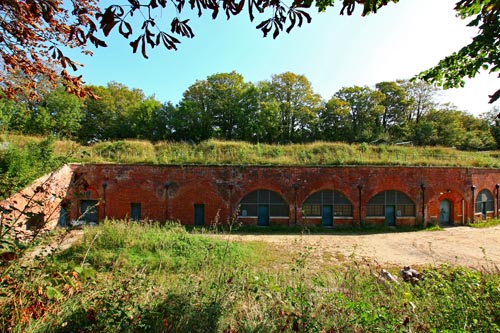 Hilsea Lines at Portsmouth are a set of military fortifications built in the 18th and 19th centuries to protect the northern coastal approach to Portsea Island, on which Portsmouth is located. Although some of the original fortifications have been removed and some are overgrown by vegetation, large sections are still in existence and visible.

Portsmouth is unique in being the only City in England built on an island, a tidal channel separates Portsea Island from the mainland. In time of conflict, this area was crucial in the defence of the island and fortifications were built at the northern bridgehead and on the southern side of the crossing.

It is thought that a defensive building was constructed in the Hilsea area in the reign of Henry VIII, but a fort definitely existed at the time of the Civil War, it was seized by Parliamentary soldiers on 12th August 1642.

During the 18th century Britain was involved in a number of wars with European neighbours and a new fort was built to defend Portsbridge by John Desmaretz in 1746.

In 1756 at the start of the Seven Years War, the Board of Ordnance ordered improvement work to be carried out to the fort, which was completed in July 1757. The improvements included the building of a fortified line along the northern shore of Portsea Island, Hilsea Lines, this included magazines, storehouses, and barracks for two battalions of soldiers at Hilsea Common.

In 1845 the London and Brighton Company opened a railway onto Portsea Island and as part of the construction works the company was made to build a small redoubt, a small fort, which had a retractable drawbridge, where the railway cut through the lines.

Following military lessons learnt during the Crimean War with Russia and with a growing mistrust of Napoleon and fear of war with France, the Inspector General of Fortifications prepared plans to improve defences at vulnerable points such as Portsbridge, in 1857 Colonel WFD Jervois submitted plans for 'completing the defence works of Portsmouth', work began in 1858 and was not completed until 1871.

As artillery technology advanced and rifle breech loading guns were developed, the importance of defensive lines such as Hilsea declined, the range and accuracy of the new artillery improved dramatically and targets could be hit from much longer range.

During the 1st World War the lines were armed with 4 Maxim 0.303 inch machine guns with one infantry company and three officers. They were tasked with protecting the road and railway bridges against raids. Two squadrons of Imperial Yeomanry and cyclists were also based here, to patrol the country to the east of the lines.

In 1917 with the Royal Navy expanding, the War Department was moved out of Gunwharf, to free up space, the mobilization stores at Hilsea were converted to an Ordnance depot to house them. This work included extensive railway sidings, wharfs, warehouse and workshop facilities.

In 1921 the depot was taken over by the Royal Army Ordnance Corps, who moved from Red barracks, Woolwich to Hilsea barracks. The remainder of the defences became surplus to military use and was gradually sold off for various redevelopments. The Hilsea arches were demolished in 1919. The west battery was demolished in 1933 to make way for the construction of a bus depot. 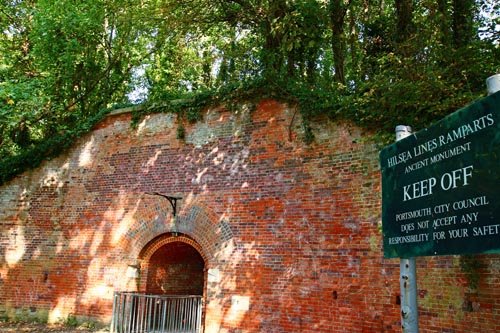 West demi bastion was bought by Portsmouth Grammar School for use as sports facilities, the majority of the western end of the lines was redeveloped as Hilsea Lido.

During the 2nd World War, what was left of Hilsea Lines was occupied by the Home Guard an assortment of guns were mounted for defensive use and an emergency headquarters set up.

After the fall of France all of the crossings onto Portsea Island were prepared with explosive charges, so that they could be destroyed in the event of an enemy invasion.

Listed below are examples of the type of guns that were used at Hilsea Lines during it's history as a military establishment. 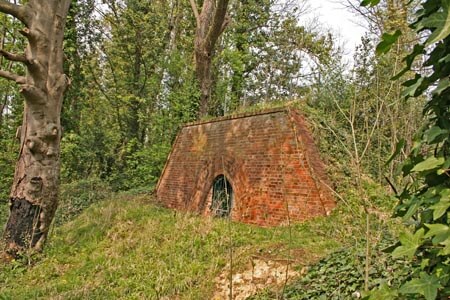 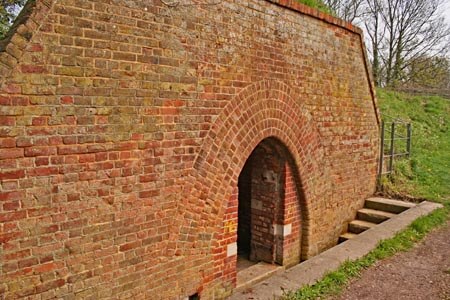