A WALK AROUND OLD PORTSMOUTH 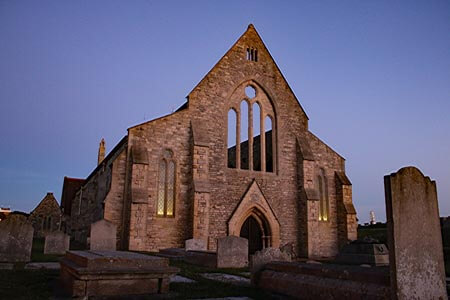 This popular walk around Old Portsmouth has it all. Sea views, historic monuments, mixed with new developments.

Old Portsmouth, also know as Spice Island, is the area of the original medieval town of Portsmouth founded by Jean de Gisors. It is still retains many historic buildings such as the Square Tower, the Round Tower and the Royal Garrison Church at Penny Street.

This is the historic heart of Portsmouth and you will pass fortifications built during the reign of Henry VII, the old Camber Dock as well as much more modern constructions. There are plenty of places to get refreshments along the way, cafes and pubs with bustling harbour views. take at look at our Old Portsmouth Restaurants listing here.

Start by parking either at Grand Parade, pay and display or on any of the nearby streets, be sure to check for parking time restrictions. From Grand Parade walk east towards the Royal Garrison Church. Founded in 1212 as a hospice, (a house of shelter or rest for pilgrims, strangers, etc., especially one kept by a religious order) the Domus Dei (God's house), was used by overseas pilgrims arriving here before travelling to Canterbury, Chichester and Winchester.

The church was closed during the dissolution under Henry VIII, part of the site being converted into a residence for the Governor of Portsmouth. Later the church was used by the garrison troops and was restored between 1866 and 1868. The Nave of the church was gutted by a fire bomb during the 10th January 1941 Blitz, hence its current roofless appearance.

Continue walking east on the path situated between the church and a high grass bank. The bank is part of the fortifications built to defend the Town of Portsmouth from attack. Continue along this path until you come to an opening in the fortifications on your right.

Turn right into the tunnel, this will lead you to a bridge which crosses the defensive moat. This is the same route which Nelson took on his way to board HMS Victory on route to the Battle of Trafalgar.

On the south side of the moat, you join the seafront promenade, follow this in westerly direction, away from the fun fair at Clarence Pier.
On the ground in the paving you will see a chain design incorporated into the paving, this is the Millennium promenade, you can use this as a guide until you get to the Point, just past the Still and West pub.

Along this section of the walk you will again follow the old fortifications passing first the Square Tower, residence of the Governor of Portsmouth in Tudor times and then the Round Tower, started by Edward III and completed by Henry VIII. For great views of the harbour, climb the steps to the top of the Round Tower.

When you have descended from the tower and the fortifications, follow the millennium promenade markings through a narrow gate, just at the base of the round tower.

When you pass through the gateway you will enter Capstan Square, named after the capstan which was located here in the past, this was be used to raise a chain across the harbour entrance to prevent enemy ships from entering. 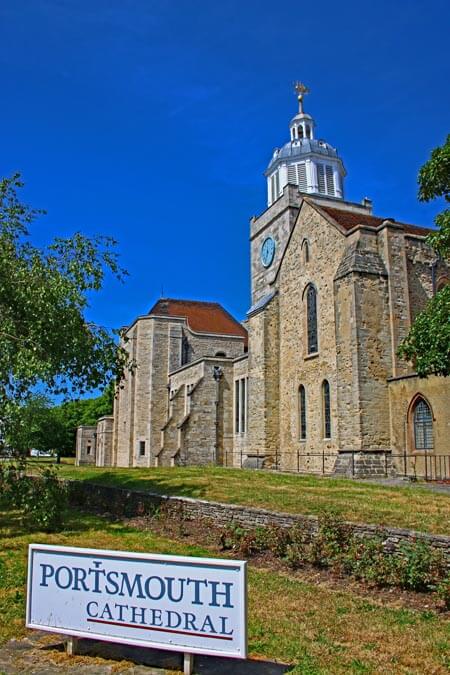 Exit the square and turn left, following the narrow cobbled streets towards the Point, still following the Millennium Promenade. At Portsmouth Point there are excellent views of the harbour towards the Spinnaker Tower and HMS Warrior, with the masts of HMS Victory visible beyond.

Leave the Point by walking along Broad Street, not the street you entered by, until you reach East Street, here turn left and then take the next left along the cobbled road alongside the Ben Ainslie Racing (BAR) Americas Cup head quarter building. Join the dockside and follow this all the way round, passing, or stopping, at the Bridge Tavern. On the side wall of the Bridge Tavern is a large mural version of Thomas Rowlanson's cartoon entitled 'Portsmouth Point'.

Continue following the dockside to the top and then rejoin Broad Street via Seagers Close. Turn left onto Broad Street and again follow the Millennium Promenade chain design in the paving, after a couple of hundred yards, this will direct you left down a narrow lane, again on the edge of Camber Docks. Follow this lane until it emerges onto the street at White Hart Lane.

Turn right into White Hart Lane, the Millennium Promenade goes the opposite direction at this point. Follow the road for several hundred yards until you see a footpath that passes through the housing to your left, pass through here.

At the other side of the housing you will see St Thomas' Anglican Cathedral. First built in 1185, the original church was dedicated to Thomas Becket the Archbishop of Canterbury who was famously murdered in 1170.

When you have finished at the Cathedral, cross the High Street, towards the Dolphin pub and turn right onto Pembroke Road walking east at the next corner, at the Pembroke pub, turn right into Penny Street walking south, you again pass the Royal Garrison Church on your left and rejoin Grand Parade where you began.
In the corner of Grand Parade you will see the statue of Lord Nelson, this statue has been relocated from its original position just south of Pembroke Road.