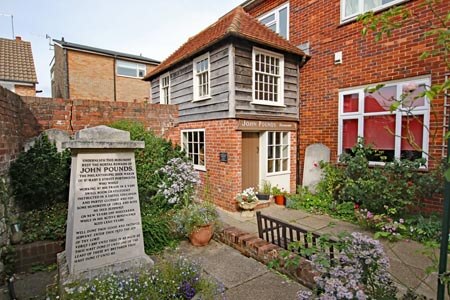 John Pounds (1766-1839) a Portsmouth cobbler, began teaching poor children without charging fees in 1818, unknowingly leading to a revolution in the British education system. Thomas Guthrie, the Scottish philanthropist built upon Pounds idea of free schooling for working class children and started a ragged school in Edinburgh.

John Pounds was born on June 17th 1766 in St Mary's Street, Old Portsmouth. His father was a sawyer who worked in Portsmouth Dockyard and aged just twelve years old, John himself took employment as an apprentice shipwright in the Dockyard.

A shipwright is a skilled craftsman employed to build and repair naval ships at the Dockyard. The apprenticeship typically would involve four or five years of training. Unfortunately only three years into his apprenticeship John suffered a life changing accident whilst at work, he fell into a dry dock, he was lucky to survive at all, but he did suffer serious injuries to his back, leaving him badly deformed and unable to continue with his training.

Requiring a long period of recovery he was unable to work and spent the time educating himself, learning to read and write and studying a wide selection of topics. His back was badly damaged causing him to bend almost double and his strength was much reduced, but he learned to live with his disability and started looking for suitable employment. He became a cobbler mending shoes, employed by several people and eventually set up his own shop in St Mary's Street.

John's brother had a son, also named John, who had been born with a deformity, which caused his feet to be turned inwards to each other. The only treatment at the time would be to have his ankles broken and his feet realigned, a dangerous and painful operation. John Pounds offered to take his nephew, known as Johnnie, into his care. He made Johnnie a special pair of boots, which could be adjusted gradually over time straightening up the malformed feet and eventually allowing him to walk normally. He made similar orthopaedic boots for other children over time.

John allowed Johnnie and his friends to play in the workshop whilst he was repairing shoes and boots and whilst there John began teaching them to read and write, simple arithmetic and other general knowledge. Almost by accident John had become a teacher. In time more children joined the lessons using slates, bibles and other materials donated by local churches and supporters. All lessons were provided free of charge. Conditions for the children of poor working class families were very bad, childrens education was unheard of and they often wore just rags of clothing. John was able to collect clothes from his many friends and supporters and give them to his pupils. He often walked the streets giving baked potatoes to the waifs and strays he found in the area, having won their trust he was able to encourage them to join his school.

The conditions and the lack of opportunities that this underclass received, often led them into a life of crime as a means of survival, stealing and picking pockets. John realised that education was the key to breaking this cycle and led the way for educational reformers such as Thomas Guthrie in Scotland and the Earl of Shaftesbury who later were able to pioneer free education for children. More than conventional education, John Pound taught his pupils how to mend their clothes, to cook and arts and crafts such as toy making. 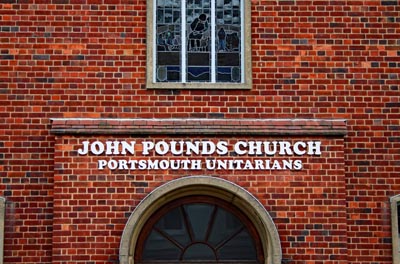 John often took the children on outdoor activities and lessons, believing that the fresh air was good for them, visiting the sea shore or the countryside outside of the towns walls. They would collect flowers and learn about wildlife, plants and nature.

On Sunday's John attended the High Street Chapel, rebuilt following bombing during world war two and now called the John Pounds Memorial Church. After a meal at his workshop, the children accompanied John to the chapel.

On January 1st 1839, John collapsed whilst visiting Edward Carter, one of his supporters and six times Mayor of Portsmouth, John never recovered and died shortly after. A fund was started to build a memorial to John and to recognise the work he had done for the children of the poor. This can be seen in the memorial garden at the John Pound Memorial Church in the High Street at Old Portsmouth.

After his death several schools were formed in other parts of the town following the ideas and principals that John had used and the movement also spread to other parts of the country. Dr Thomas Guthrie saw a picture of John Pounds working in his workshop surrounded by children and was inspired to build on John's work in his home town of Edinburgh, the schools which developed were known as the Ragged Schools.

Social and educational reformers such as Lord Shaftesbury, Charles Dickens, Angela Coutts and others supported the movement. In 1852 the Ragged Schools movement was able to lobby parliament resulting in the formation of a committee in the House of Commons to explore the use of education as a means of improving conditions and reducing juvenile crime.

John Pounds became known as the originator of the Ragged Schools movement and therefore helped put in motion reforms that led to the establishment of a universal education system in this country.

Following his death in 1839 a group of Portsmouth ladies vowed to continue Pounds work caring for and educating poor or neglected children. The house that they used in Kent Road was destroyed during the 2nd world war, but the compensation money awarded by the War commissioners was used by the reverend John Sturges to set up the John Pounds Trust in 1957. The Trust continues to provide financial support for children's education in the Portsmouth area.

Unfortunately the original workshop no longer exists, and as mentioned earlier, the Chapel that John attended was destroyed by bombing during world war two. But the chapel was rebuilt and renamed the John Pounds Memorial Church. At the rear of the church in the memorial garden a reconstruction of Johns Pound's workshop has been built. The building, built to original size, is tiny, only 7 feet wide and sixteen feet deep and it has just two rooms, one upstairs a bedroom and one downstairs, which was the workshop, schoolroom and living room all in one. The workshop can be visited via the church. 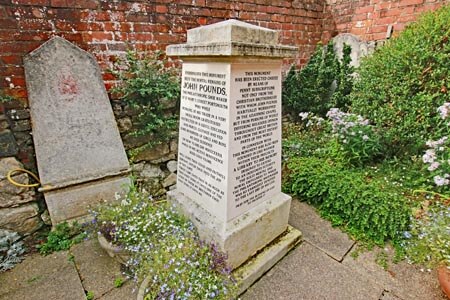 The inscription on his memorial stone reads as follows, "This monument has been erected chiefly by means of penny subscriptions not only from the Christian brotherhood with whom John Pounds habitually worshipped in the adjoining chapel.

But from persons of widely differing religious opinion throughout Great Britain and from the most distant parts of the world. In connexion with this monument has also been founded in manner within these precixts a library to his memory designed to extend to an indefinite futurity the solid mental and moral usefulness to which the philanthropic shoemaker was so earnestly devoted to the last day of his life.

Pray for the blessing of god to prosper it."