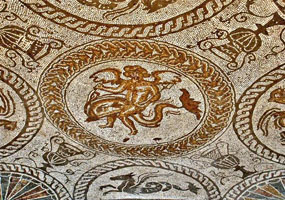 The Roman Palace at Fishbourne, near Chichester, approximately 16 miles from Portsmouth, was discovered by accident in 1960. Workmen digging a trench for a water main uncovered the site, following this initial find a further nine excavations were made, showing that the site developed from a military base around AD43, a time of Roman invasion, into a highly decorated palace by the 1st century.

Not long after its construction, the military site was abandoned and the buildings were demolished, the site was redeveloped and a timber dwelling constructed, containing 12 rooms, including servants quarters.

In about AD65-75 the timber built construction was dismantled and a more elaborate stone structure was built, much of this lies underneath the modern buildings on the southern side of the A27, limited excavations have taken place there, so the overall plan of the palace is known.

The final phase of construction of the palace that can be seen today, began at around AD75. Fishbourne Palace has a central courtyard, surrounded by four symmetrical wings. The main entrance is in the eastern wing, with a large reception chamber in the western wing.

Development of the palace is thought to have continued for at least the next 200 years. The palace was elaborately decorated with mosaic floors, sometimes new Mosaics were simply laid over the top of older ones. Fragments of highly decorated wall plaster have been found, suggesting that the walls were also elaborately painted. 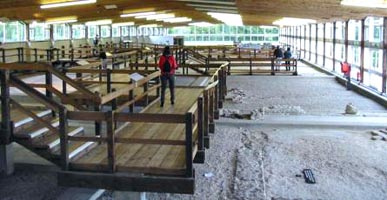 It is believed that Tiberius Claudius Togidubnus lived at the palace, as the Governor of Noviomagus Reginorum, 'New Market of the Proud Ones', the Roman name for Chichester. He is the only known Britain to be made a member of the Roman senate and is thought to have controlled the whole of Britain South of the Thames, including parts of Dorset, Hampshire and Surrey, and all of Kent and Sussex, on behalf of Rome.

Sometime during the 3rd century a major fire damaged large areas of the palace, it was never repaired and the palace gradually deteriorated and crumbled, some of its stonework was salvaged and used to construct other buildings.

Apart from several Saxon burials, the site appears to have been forgotten and laid dormant until its accidental discovery by workmen in 1960.

Portsmouth born archeologist Barry Cunliffe, Professor of Archaeology at the University of Southampton at the time, worked on the systematic excavation of Fishbourne Roman Palace between 1961 - 1968, discovering many of the mosaic floors on display today.

The section of Fishbourne Roman Palace that can be seen today is part of the north wing, this is now protected by a viewing building. The most complete Mosaic on display depicts 'Cupid on a Dolphin' and is thought to be constructed from approximately 360,000 tiles.