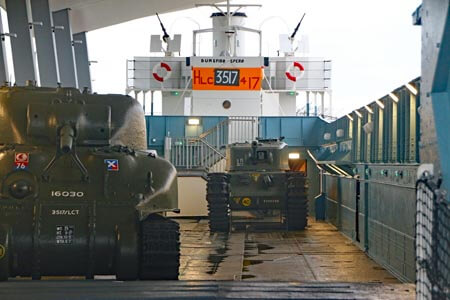 The Landing Craft Tank LCT 7074, now on display at Southsea Seafront, is the last surviving vessel of it's type.

On June 6th 1944 (D-Day) approximately 7,000 ships including 800 landing craft were used to land troops and equipment onto the beaches of Normandy. Landing Craft Tanks (LCTs) were able to carry up to ten tanks or other heavy equipment, LCT 7074 is the only one which served during the D-Day Operation Neptune to survive.

LCT 7074 (named Landfall), is a Mark 3* version of the LCT design, was built by Hawthorn, Leslie and Co, at Hebburn on the River Tyne and was launched on the 4th April, 1944.

LCT 7074 was assigned to the 17th LCT Flotilla, part of Assault Group L2, LCT Squadron "H2" of the Eastern Task Force, which supported the British landings and successfully carried troops and Sherman tanks across the channel to Normandy. She is known to have successfully delivered nine Sherman tanks on Gold Beach. 25,000 troops landed on Gold beach on the 6th June, 413 men were killed or wounded on the beach and 89 landing craft were destroyed. Following the D-Day Landings, LCT 7074 made a further 32 crossings of the English Channel delivering troops and equipment in support of the Allied advance across Europe. 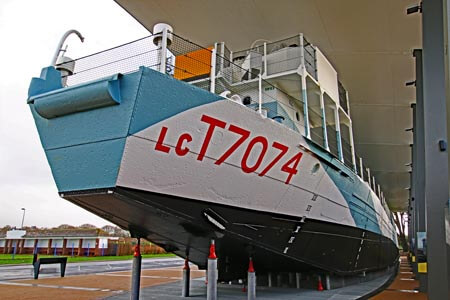 After the end of the Second World War, the vessel was de-commissioned and presented in 1948 to the Master Mariners' Club of Liverpool, here she was converted into a clubhouse and meeting place for officers and sailors of visiting Royal Navy vessels.

Following this she was converted into a floating night club and restaurant, known as "Landfall Nightclub" based at Liverpool's Canning Dock in the 1960s and 1970s. Whilst being used as a night club the vessel featured as a location in the 1985 film " Letter To Brezhnev"

In the late 1990's the landing craft was bought by the Warship Preservation Trust and put on display at East Float Dock, Birkenhead, unfortunately the Trust went into administration in 2006, LCT 7074 was left to rot partially submerged in the dock.

In 2014 the vessel was salvaged and moved to the The National Museum of the Royal Navy in Portsmouth Dockyard. Funded by a grant of £4.7 million from the National Lottery Heritage Fund along with donations from the public, LCT 7074 has been restored to her former glory by the highly skilled craftsmen at Portsmouth's Historic Dockyard.

During the night of 23rd August 2020 the restored landing craft was shipped to her present location, at the D-D Story Museum, by barge from Portsmouth Naval Base and then along the seafront road where she was maneuvered into the newly constructed canopy. The construction of the cantilevered canopy and basin to house and protect this D-Day treasure was carried out by Ascia Construction in conjunction with Pritchard Architecture.

Apart from LCT 7074, only a very small number of vessels that took part in the Normandy Landings still exist. These include the cruiser HMS Belfast on The Thames in London, and MTB 102 and MGB 81 two small craft operated by Portsmouth Naval Base Property Trust. You can visit the LCT 7074 at Clarence Esplanade next door to the D-Day Story Museum. 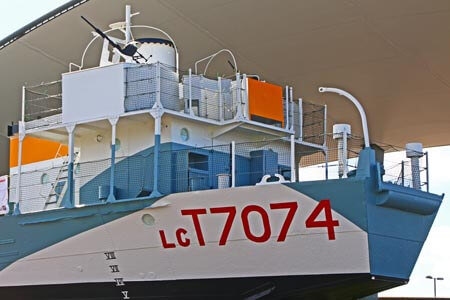 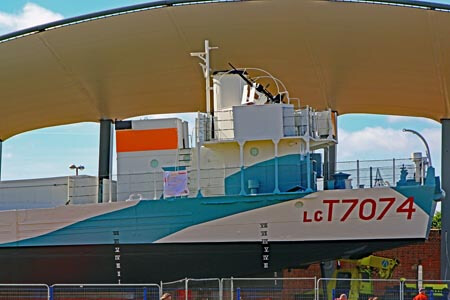