The story of Portsmouth Historic Dockyard 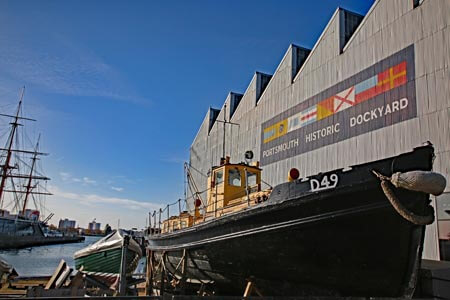 Portsmouth Dockyard home of the Royal Navy, is also home to a world class collection of historic ships and historic naval attractions including.
• HMS Victory Nelson's famous flagship.
• HMS Warrior the world's first armoured warship.
• Mary Rose the Tudor warship raised from The Solent seabed in 1982.
• HMS M.33 the veteran of the Dardanelles Campaign of 1915-1916.
• No4 Boathouse wooden boat building and restoration hall.
• The National Museum of the Royal Navy.
Although it was King Richard who ordered that a dock be built at Portsmouth Dockyard in 1194, it was during the reign of King John that the development of Portsmouth Dockyard really began. King John's army had lost significant battles to the French in Normandy in 1204, forcing England into a more defencive role. King John had a new defensive wall built to protect the dockyard and it became an assembly point for attacks on France. 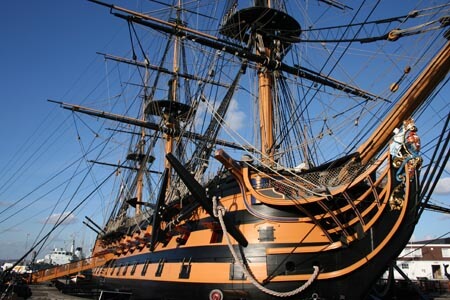 From this period until the reign of Henry VII little is recorded about the development of Portsmouth Dockyard, although during the reign of Edward IV a "keeper of the Royal Ships" was appointed and sailors were issued with jackets, an early form of uniform.

Following the War of the Roses, Henry VII wanted to strengthen the position of England and carried out some development works at Portsmouth Dockyard. He improved the defensive fortifications around the mouth of Portsmouth Harbour including the rebuilding of the two Round Towers, at Portsmouth Point and at Blockhouse, Gosport and the construction of the Square Tower at the end of Portsmouth High Street.

In addition he purchased approximately eight acres of land to expanding the dockyard, the first dry dock, store buildings, a forge and other facilities were constructed.

Following the death of Henry VIII until the Civil War, the dockyard at Portsmouth entered a period of decline. Portsmouth was captured by the Roundheads in 1642, the Siege of Portsmouth, and this saw a period of rapid expansion of the dockyard, new ships were needed to replace those loyal to the King, this required a new dock to be built which was started in 1648, it was completed in 1658 and in the same year construction of a double dock began and a further dry dock was ordered.

The great age of sail and a period of almost endless war, saw the development and importance of Portsmouth Dockyard grow rapidly. By 1800 the Royal Navy had 684 ships and the dockyard is said to have been the largest industrial site in the world. A steam powered factory was developed using machinery designed by Marc Brunel to manufacture the blocks, as in block and tackle, which were used to raise and lower the ships sails and rigging. The Block Mills were the first application of machine tools used for mass production. By 1808 45 machines were able to produce 130,000 ships pulley blocks a year. 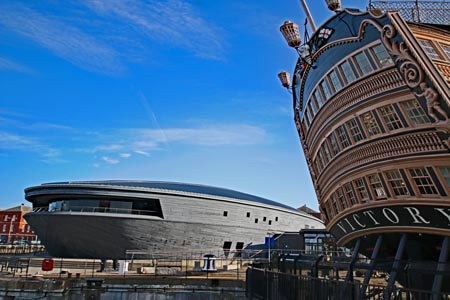 At the end of the Napoleonic wars, the scale of the Dockyard was reduced and in the 1820's hundreds of workers were laid off, however this was only a temporary set back, the development of steam propulsion provided the greatest expansion of the dockyard, the workforce trebled within 20 years.

The second half of the 19th century saw massive changes and expansion at Portsmouth Dockyard, new factories were built, new docks were constructed and an additional 180 acres were added to the yard.
The first steel ship was built to be built in Portsmouth was HMS Colossus, launched in 1882. In 1905 HMS Dreadnought was built. A steel screwed steamship of 15,000 tons, the Dreadnought was the first major ship to have steam turbines and revolutionised naval ship design forever.

Development at the dockyard continued with additional basins and locks being constructed, in 1913 the super dreadnought, HMS Queen Elizabeth was launched, this was the first oil-fired battleship.

In 1984 the Royal Dockyard was renamed the Naval Base Fleet Maintenance and Repair Organisation, it occupied an area of approximately 300 acres and housed non tidal basins, 100's of buildings and 17 dry docks.

Part of the Historic Dockyard is open to visitors and this is run by the Portsmouth Historic Dockyard Ltd (PHDL) a registered charity, some 500,000 visitors a year enjoy the attractions on offer including the Mary Rose Museum, HMS Warrior 1860, HMS Victory, National Museum of the Royal Navy, Action Stations and Harbour Tours. 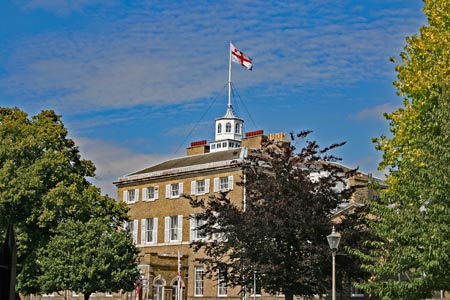 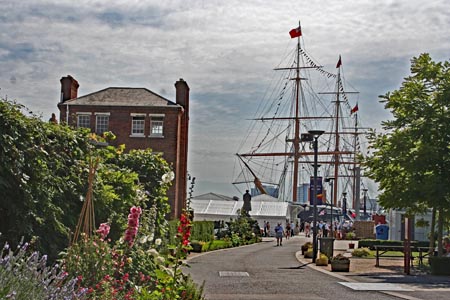