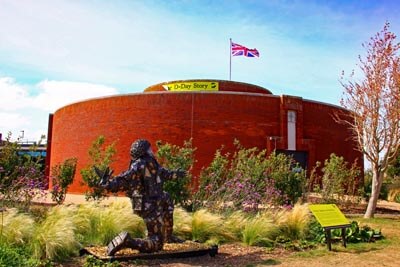 The D-Day Story Museum at Clarence Parade in Southsea, tells the story of Operation Overlord and the dramatic events that took place during the Liberation of Normandy in June 1944. The D-Day landings and subsequent Battle of Normandy was the turning point in the battle for Europe during the Second World War.

The museum was renovated during 2017 and 2018 and re-opened in time for the 75th commemoration of D-Day in June 2019. The D-Day Story walks you through three distinct periods of the D-Day landings, preparation for D-Day explains the planning and preparation for the operation and the key people involved in this.

D-Day is concerned with the events of the 6th June 1944 and the displays bring to life the dramatic events and sacrifices that were made using thousands of artefacts, maps, equipment as well as poignant and thought provoking audio visual displays. Legacy, which includes the Overlord Embroidery, commemorates the people who took part in the operation, both military and civilians alike.

The invasion on D-Day was one of the largest amphibious military operations ever undertaken, during which there were an estimated 10,000 allied casualties including 2,500 dead. German casualties are estimated to be between 4,000 and 9,000 on just D-Day itself. As the Battle of Normandy continued an estimated 110,000 from both sides were killed, as many as 20,000 French civilians also lost their lives.

The first area of the D-Day Story that you visit tells the story of the preparation for D-Day. At the centre of this were the roles of General Dwight D. Eisenhower and General Bernard Montgomery. The operation was to include airborne, ground and sea forces and the logistical problems were huge. Extensive training was implemented, photo-reconnaissance and mapping was carried out, weapons, equipment and supplies were manufactured and co-ordinated.

The second area of the museum covers D-Day itself 6th June 1944. Displayed here are a vast collection of artefacts, telling the story from the different perspectives of the people who took part. In this area there are some dramatic audio visual displays that really bring to life the events that occurred. Be careful not to rush through this area, the audio visual displays are played automatically, you may miss something if you do not allow sufficient time.

The third section of the museum looks at the legacy of the D-Day operations, this includes the display of the Overlord Embroidery. This was commissioned by Lord Dulverton in 1968 and was inspired by the Bayeux Tapestry depicting the Norman invasion of England in 1066. The embroidery consists of 34 panels each panel is 2.4 metres long and 0.9 metres high. The complete embroidery is 83 metres in length.

The artist Sandra Lawrence was commissioned to design and paint the original panels for the Overlord Embroidery, these now hang in the Pentagon Headquarters of the US Department of Defense near Washington USA. The panels were transformed from the paintings into the embroidery by needle workers at the Royal School of Needlework, it took 25 people 4 years to complete the work. Also part of the legacy section are personal stories and memories of veterans who took part in the D-Day operations.

Housed next door to the D-Day Story, is the 59 metre long LCT 7074 Tank Landing Craft, the only surviving tank landing craft which was used during the Normandy Landings on D-Day. Read the story of the LCT 7074 here.

The museum has a large car park to the rear, there is a cafe serving refreshments and an educational room is available for use by school parties.