Stansted House is situated in 1750 acres of beautiful park and woodland, near Rowlands Castle on the Hampshire, West Sussex border, approximately 12 miles from Portsmouth and is one of southern England's best stately homes.

Stansted boasts excellent displays of furniture, art work, porcelain alongside the beauty of the house itself, which includes superb state rooms, the grounds alone merit a visit and include walled gardens, a garden centre, ancient chapel, miniature railway and tearoom.

The original building on this site was a hunting lodge built in the 11th century. Following that a more substantial country house was built at Stansted in 1688 for Richard Lumley, unfortunately this was destroyed by fire in 1900 and rebuilt in 1903.

Stansted House was bought in 1924 by the Bessborough family and owned and lived in by the 9th and 10th Earls of Bessborough, a comprehensive history of Stansted Park can be found in Lord Bessboroughs book titled "The Enchanted Forest".

The House and Estate have been owned, since 1983, by Stansted Park Foundation, a charitable trust entrusted with the preservation of the estate for the benefit of the nation, the wish of the last owner, Frederick Ponsonby, 10th Earl of Bessborough.

The Chapel of St Paul was consecrated on 25th January 1819, the ceremony was attended by three hundred people, among them the poet John Keats. he is thought to have used imagery of the chapel in his poems The Eve of St Mark and The Eve of St Agnes.

Stansted Park is also home to an extensive and well stocked garden centre and the lovely Pavilion Tearoom which is situated in the walled gardens. There is a range of footpaths and bridleways across the Stansted Estate, including the Sussex Border Path. Some areas are closed to the public to protect wildlife, dogs must always be kept under close control.

House and Chapel, open from Easter Sunday until the end of September on Sundays and Mondays 1pm - 4pm.
July and August Sunday, Monday, Tuesday and Wednesday 1pm - 4pm.

Grounds and other attractions, open all year round. Free car parks are open 9-5pm with restricted access during the winter. 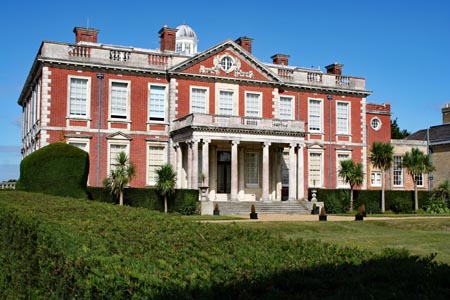