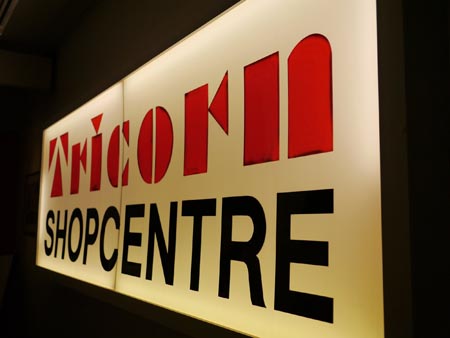 The Tricorn Centre at Market Way in Portsmouth's City Centre was a mixed use 10 story building incorporating a multistory car park, shops and retail units, supermarket, market, two pubs, a petrol station, a nightclub and at one time the largest laser quest site in Europe.

The centre was designed by the Owen Luder Partnership and overseen by architect Rodney Gordon. The building was constructed from concrete in the brutalist style of the 1960's influenced by the work of Le Corbusier the Swiss-French architect and pioneer of modern architecture.

Opened in 1966 The Tricorn Centre was so named because in plan view, looking down from above, it resembled a three pointed hat or tricorn.

From the very start people either loved or hated the centre, in the 1980's it was voted as the third ugliest building in the UK and Prince Charles described it as "a mildewed lump of elephant droppings".

Although not quite connected to the main existing shopping area of Commercial Road, the 23 acre Tricorn Centre Shopping Zone was marketed as being "a natural magnet to the rest of South Hampshire" and also described in marketing literature as "a trail-blazer for even more ambitious schemes".

There was a Fine Fare supermarket at the Tricorn Centre and one of the first Virgin Megastores, but there was a reluctance of large anchor stores to move into the development and away from Commercial Road, so the businesses there were mainly smaller traders. The city council moved the fruit and vegetable market which had always been held in Commercial Road and relocated it into the ground floor of the Tricorn Centre in an attempt to stimulate footfall.

During the 1980's the centre started to become run down and neglected, structural steel work within the concrete structure began to rust and damage the concrete, in some areas stalactites grew hanging down from ceilings and wall edges.

There were arguments from both sides regarding the future of the Tricorn, supporters failed in their attempts to get the Tricorn Centre listed status as a fine example of Brutalist architecture. Also plans were mooted to repair and revitalise the centre. Ultimately after years of indecision it was decided that the entire centre be demolished and a new shopping centre built to replace it. Demolition started in March 2004 and took 9 months to complete, however a new shopping centre was never built and it remains merely as a car park still. 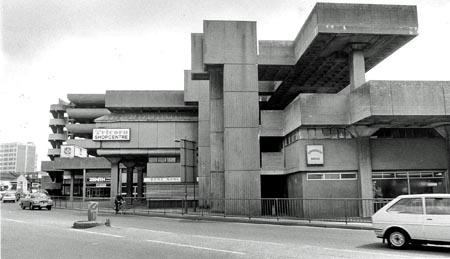 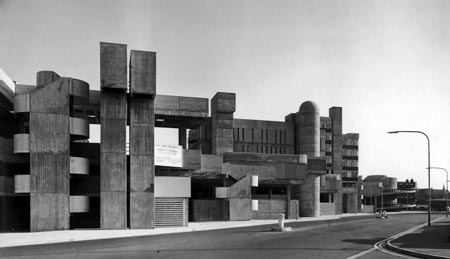 Memories of The Tricorn Centre.

Although the Tricorn Centre attracted a lot of negative feedback during it's life time many local people loved the building, the facilities it provided and still have fond memories of it today.

Some of these memories are reproduced here, in response to the Tweet shown below.

Images in this section courtsey of Andy Bart via Twitter. Thanks Andy. 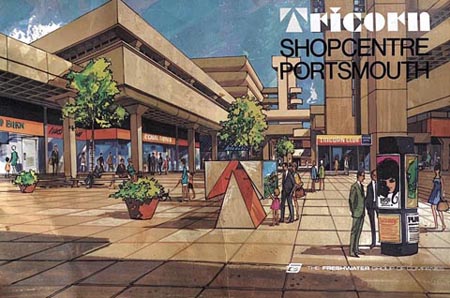 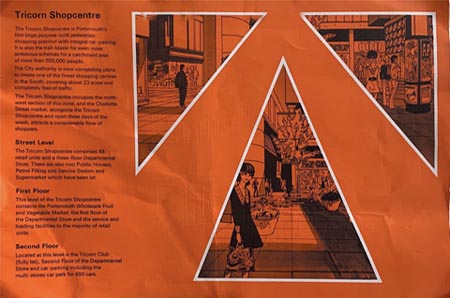 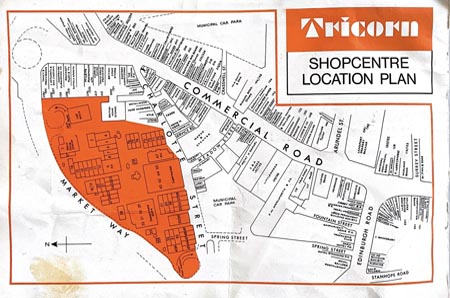 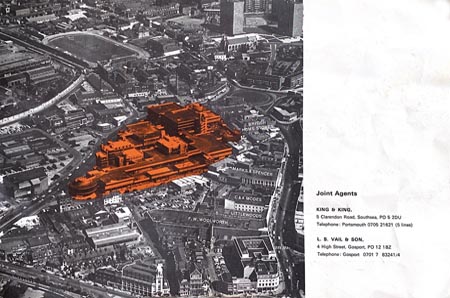 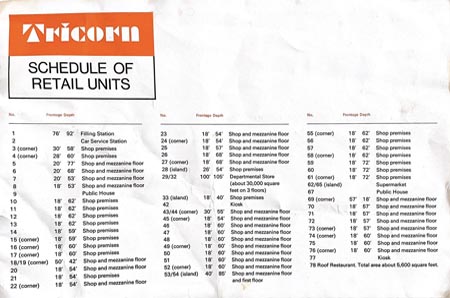 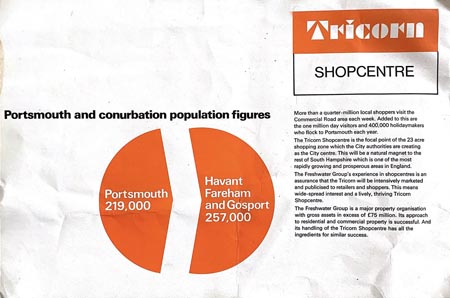 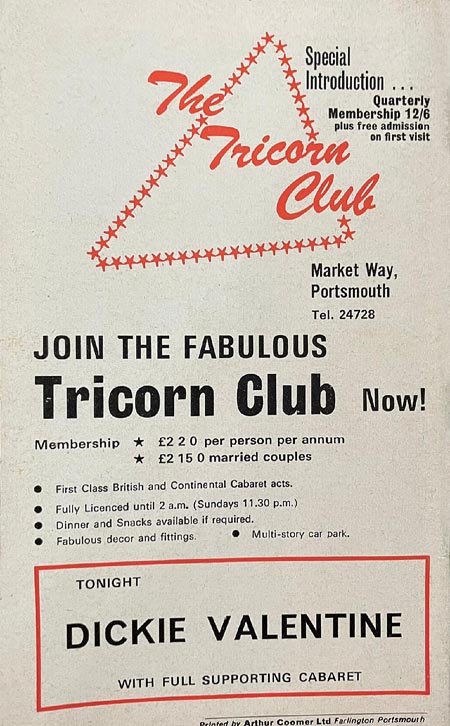 The Tricorn Club opened in September 1968 and was perceived as a late night cabaret, restaurant and wine bar. Disco nights, called the Monday Club, were held on Monday evenings for the younger set. The Tricorn Club restaurant served four course meals at a set price, the club was licenced to open until 2am.

This image of The Tricorn Club promotional flyer is courtesy of Bob Beech via Twitter, thanks Bob.

On the opening night Dickie Valentine, a famous British pop singer, was the star attraction. Dickie who had previously sung with the Ted Heath Orchestra (big band), had achieved two No 1 hit records with Finger of Suspicion and Christmas Alphabet as well as a string of other top ten hits.

Membership at the Tricorn Club was initially £2 - 2 shillings a year, with a minimum age of 18. The house band were The Mood Indigo in 1969 they were replaced by the Mel Douglas Set.

The club aimed to host the best British and European Cabaret and musical acts available.

After it's closure The Tricorn Club was renamed as Gabriellas for a short period in the early 1970's and then became Granny's Nighspot in the mid 1970's until the closure of the Tricorn Centre in 2004. 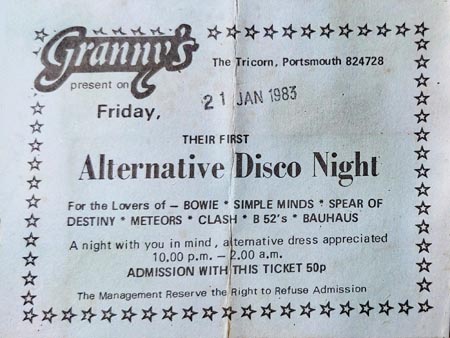 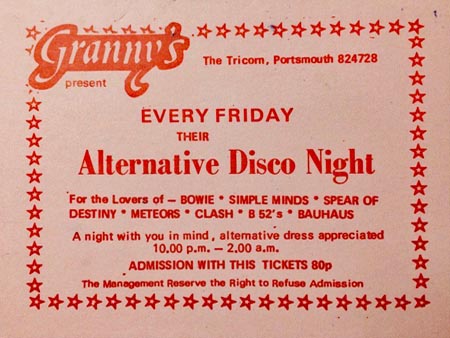 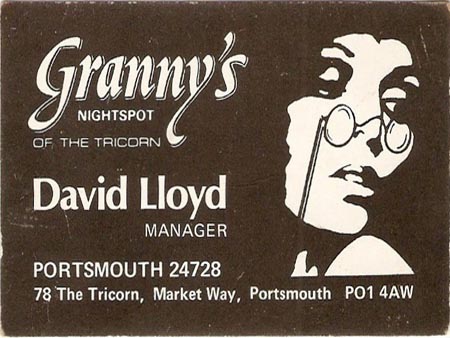 Granny's was famous for having a shiny silver tree in the middle of the dance floor, not sure why it was there though?