Baffins Pond, is a naturally fed pond surrounded by parkland rich in wildlife covering an area of approximately 4.35 hectares, located between Tangiers Road and Hayling Avenue in the Baffins area of Portsmouth. The park is also home to a childrens play area and tennis courts.

Baffins Pond was originally part of Baffins Farm which had occupied the location since the 12th century. During the 1930's the areas surrounding Baffins were part of the urban development spreading across Portsea Island as more housing was required for the growing population of the city. Baffins Farmhouse used to stand in the area close to the current tennis courts.

A campaign was started to ensure that Baffins Pond could survive the ensuing redevelopment and in 1938 the decision was finally made that Portsmouth Corporation would buy the site from the landowners Morey and Flowers, enabling the Corporation to protect the area, allowing it's use as a public park. The owners sold the site to Portsmouth Council for a sum of £5,500 subject to the council "undertaking to preserve the site as an open space and not to erect any buildings thereon, except pavilions or similar buildings used in connection with recreation grounds."

The pond is naturally fed from springs in the local water table, but due to the nature of the groundwater supply it is prone to silting up. In the summer months when the natural water levels drop the pond level also drops which can be dangerous for the wildlife especially the fish. To compensate for this a 100 metre deep well has been drilled below the pond which can provide an alternative water supply as required.

Baffins Pond is home to a wide range of ducks, swans and other visiting water fowl, visitors are asked only to feed these birds with grain for the good of the birds and also the pond itself. Suitable bird food can be purchased from various shops in Tangier Road. The birds commonly seen at Baffins Pond include Mallard, Canada Geese, Barnacle Geese, Shovelers and Tufted Ducks, Mute Swans and Coots. Rarer visitors include Cormorants, Little Grebe and Grey Heron.

The banks and island in the pond support a wide range of flora and fauna and much work has been carried out in recent years to promote and protect these areas. Just to the east of Baffins Pond is a large childrens play area with a great range of swings slides and other adventurous play equipment. There is also a fenced off tennis and multi ball sports court. 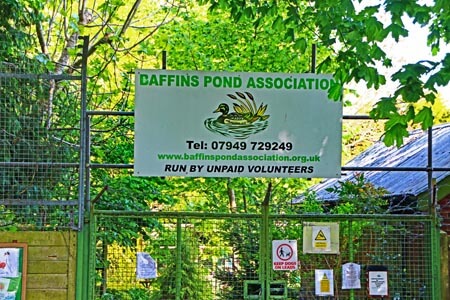 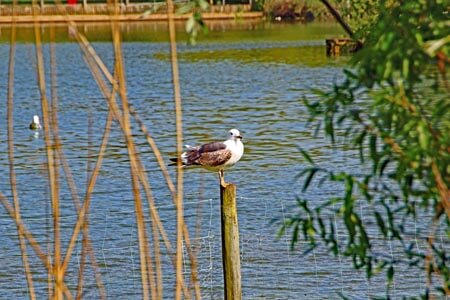