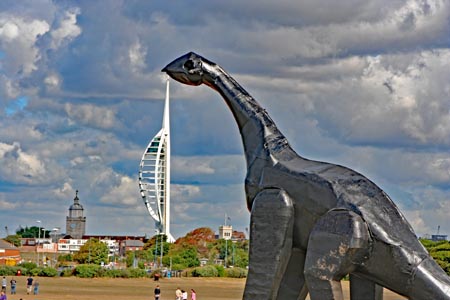 During the summer of 2010 there was a 16 metre high dinosaur on the loose on Southsea Common. This was extremely popular with children and adults alike and often had children climbing all over it's tail. The huge dinosaur was the creation of Heather and Ivan Morison and is part of the Aspex Gallery summer season of exhibitions and events. The sculpture was created using a steel fabricated framework, covered with a polyester exterior shell.
It was constructed close to the City of Kragujevac in Serbia, by ex employees of the Yugo car plant which closed in 2008.

The dinosaur depicted is an Ultrasauros, 'discovered' in Colarado USA in the late 1970's by Jim Jenson, at the time it was thought to have been one of the largest land animals of all time at 16 metres high and 30 metres long.

However it was later recognised that the fossilised remains that had been discovered, were actually a mixture of two separate dinosaurs lying at the same place, a large Brachiosaurid and a a huge Diplodocid dinosaur later classified as Supersaurus. This mixed up dinosaur became known as the 'accidental dinosaur'.

This sculpture Luna Park was part of the exhibition, An Unreachable Country. A Long Way To Go running at the Aspex Gallery at Gunwharf Quays.

The plan was that after the exhibition at Portsmouth, the Ultrasauros would also visit Colchester and finally Cardiff Bay in spring 2011. Unfortunately on the night of September 30th 2010, the dinosaur sculpture caught fire and was completely destroyed.

After much finger pointing and jumping to conclusions by various people, an investigation overseen by PC Jack Oakley, from Hampshire Police concluded that "it appears as though the severe weather we experienced in the early hours of Friday morning caused water to seep into the structure." "That in turn could well have resulted in an electrical fault in the lighting system on the underbelly of the structure, which was powered by a generator."

A sad end to a very popular visitor. 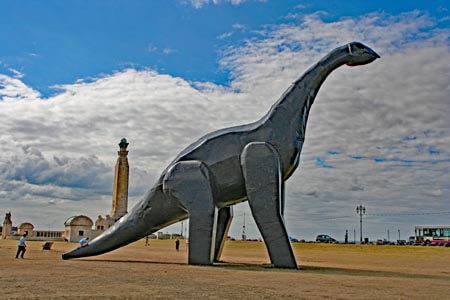 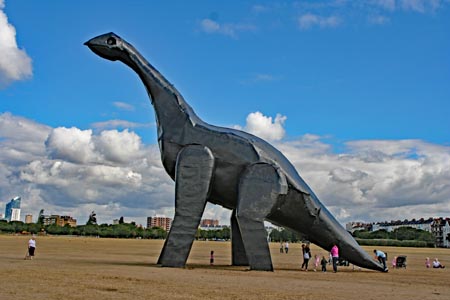