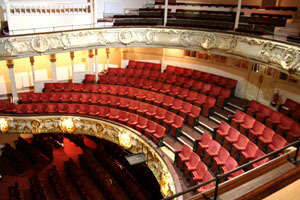 The original Theatre Royal opened in Portsmouth on the 29th September 1856, the frontage was about 38 feet, with the total depth 110 feet and housed two circles, and numerous boxes in the lower circle.

In 1876, John Waters Boughton became manager, and later the owner of the Royal. Boughton soon realised the converted hall was too small to become a major venue, so decided to build a new theatre and commissioned CJ Phipps as designer. Phipps was a noted theatrical architect and was responsible for many fine theatres, including Her Majesty's Theatre in London. The New Theatre Royal opened on 4th August, 1884, with a performance of Princess Ida.

This new theatre did good business, the great actors Irving, Ellen Terry, Bernhardt appeared on the stage and within 16 years, Boughton decided to enlarge the auditorium and stage. He engaged Frank Matcham the greatest British theatre builder of the era, to re-design the Royal, the two had already worked on the rebuilding of the Prince's Theatre in 1891.

In April 1900 the theatre was again enlarged, De Jong of London was responsible for the plaster work, and Whiteheads did the marble, both of whom employed mainly Italian craftsmen for these tasks.

The theatre continued to be successful, but unfortunately during the 1920's audiences across the country began to fall, due to the introduction of film and radio shows. In 1932 the theatre was converted into a cinema and through the 1950's and 60's was used for a variety of different uses such as wrestling and bingo.

During the late 1960's and early 1970's the theatre stood empty and vandalised. Then in 1972 children playing with fireworks caused a fire which destroyed the great stage and technical block.

The Theatre Royal Society set up a Trust Company in 1975 and it was this Trust Company which managed to purchase the Theatre in 1980. With a great deal of work carried out by volunteers the theatre has been lovingly restored.

In January 2004 the theatre closed for 6 months, re-opening September/November 2004 with the following refurbishments:-

During 2013 and 2014 the New Theatre Royal underwent major redevelopment work, partially funded by a grant from the Heritage Lottery Fund, public and private funding and in partnership with the University of Portsmouth.

The back lot of the site, which has been derelict for many years, was redeveloped to house an extension to the theatre which incorporates a state of the art flytower, back of house facilities for the theatre, highly specialised drama and music teaching facilities, and TV studios for the University.

The project, overseen by architects Penoyre and Prasad who also worked on the University of Portsmouth library extension and the Eldon building, cost approximately £10.9 million and was completed in the summer of 2014. The new section of the building is called the Anthony Minghella Creative Learning Space and will be used by the University of Portsmouth for their performing arts courses in conjunction with the National Skills Academy, Highbury College and Artswork.

The redevelopment increased the theatre capacity from 500 to 700 seats and the addition of a side entrance greatly improved accessibility.

New Theatre Royal director Caroline Sharman said: "We hope the delivery of this important project means more people will become engaged by the arts and that there will be places for leaning different creative skills, such as lighting and sound engineering."