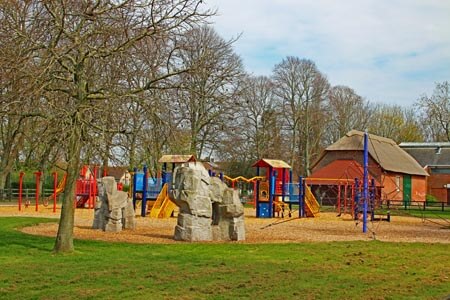 Milton Park, PO4 8RA, is located on the corner of Milton Road and Goldsmith Avenue in Portsmouth, it is bordered to the north and west by Priory Crescent and is just over 1 square kilometer in area.

This is a multi use park with a children's play area, Milton Park tennis courts, a bowls club, skate park, grassed areas, planted flower beds as well as many mature trees.

Milton, Portsmouth derives it's name from the Saxon, Middletun, meaning middle farm, Milton was halfway between the village of Froddington (Fratton) and the sea at Eastney.
In 1808 Middle Farm as it became known was part of the Milton Farm Estate owned by James Goldsmith.

In 1911 James died and the Milton Farm Estate was broken up, at this time the Portsmouth Corporation purchased Middle Farm to redevelop into a public park. The park was laid out and opened in July 1923, one of the original farm buildings, the Thatched Barn, still remains in the park and is now the home of the Portsmouth Players amateur dramatic society.

At the centre of Milton Park is the popular children's play area with a variety of play ground equipment for climbing and swinging on. Adjacent to the play area is the Thatched Barn already mentioned above, this has been extended for use by the Portsmouth Players.

At the western side of the park is the Milton Park Bowling Club which has two bowls greens. The club was formed in 1923 and is now one of the few remaining clubs from this period still in existence in Portsmouth. The club has a very successful history being champions of the Portsmouth & District League in 1930, 1932-1939 and 1961-1965. If you would like to become a member of the Milton Park Bowling Club then use this link to access their website. 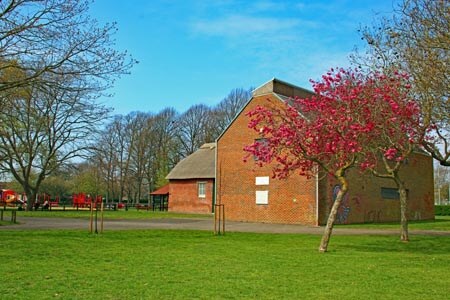 At the eastern edge of the park, the former Milton library building, replaced by the current Beddow Library, is now known as Milton Village Hall and is used by the Milton Village Community Association for meetings and can be hired privately for functions.

The hall has function rooms that can be hired for private use (one of which has access to an enclosed garden) plus a meeting area. The village hall is also home to the Pure Ground Coffee Shop serving Fairtrade coffee and delicious food, including tasty lunches and home made cakes.
Tel: 02392 873788 for more details for Milton Village Hall.

The southern section of Milton Park is parkland with grassed areas and mature trees planted along the edge of Goldsmith Avenue, named of course after the wealthy Goldsmith family, the course of Goldsmith Avenue at this point follows that of the now disused and filled in Portsmouth to Arundel Canal. The trees here offer nice shaded spots in summer and are home to a number of grey squirrels.

The northern area of the park is home to the multi use games area housing 3 tennis courts, a basketball court and a skate park area. Just across the pathway there are a further 2 enclosed tennis courts. You can play tennis here free of charge, to book a tennis court at Milton Park use this link to visit the website, register and then book.

You can find details of other Portsmouth Parks and Open Spaces here. 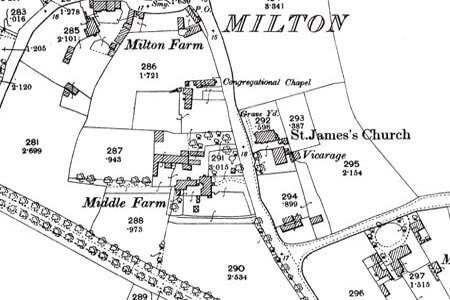